The experiments performed in the Frascati National Laboratories concern the study of the structure of matter, nuclear and sub-nuclear physics, astrophysics and cosmology. As in all the fields of physics, also in these fields experimental and theoretical research go hand in hand, complementing each other and helping to establish jointly a set of new knowledge. Experimental results, sometimes unexpected and surprising, need to be understood within the context of consistent and predictive theories, which should be as complete as possible. In turn, these theories lead to the prediction of new phenomena, which must be subjected experimental verification in order to ascertain the effective validity of the particular theories they stem from.

With the advancement of knowledge and the increasing levels of complexity achieved by physical theories, these verifications require increasingly complex challenges, and it is not uncommon that several decades can elapse between the formulation of theoretical predictions and the corresponding experimental verifications. A recent example is the discovery of the Higgs boson, whose existence was first postulated around 1964 and whose actual discovery required almost 50 years, until the joint announcement of 14 July 2012, when the two experimental collaborations ATLAS and CMS at CERN in Geneva confirmed the discovery of a new particle with a mass of approx. 125 times the mass of the proton, and with characteristics compatible (within the margins of experimental error) with those predicted by the theory for the Higgs boson.

Another very recent example concerns the detection of gravitational waves, whose existence was predicted in 1916 by Albert Einstein as an inevitable consequence of his theory of General Relativity.  On 14 September 2015, at 09:50:45 (Universal Time), the two Laser Interferometer Gravitational-wave Observatory (LIGO) detectors in the US simultaneously observed a gravitational wave signal originating from the merger of two blacks holes, of estimated mass approx. 36 and 29 times the mass of the Sun, which took place 1.3 billion light-years away from us.  After careful verification and rigorous statistical analyses the discovery was officially announced by the LIGO and VIRGO collaborations on 11 February 2016, exactly a century after the theoretical prediction.

One of the main research activities carried out by the Theory Group of the Frascati National Laboratories concerns the study of possible extensions and generalizations of the current theoretical model of fundamental interactions, the so-called “Standard Model” of elementary particles 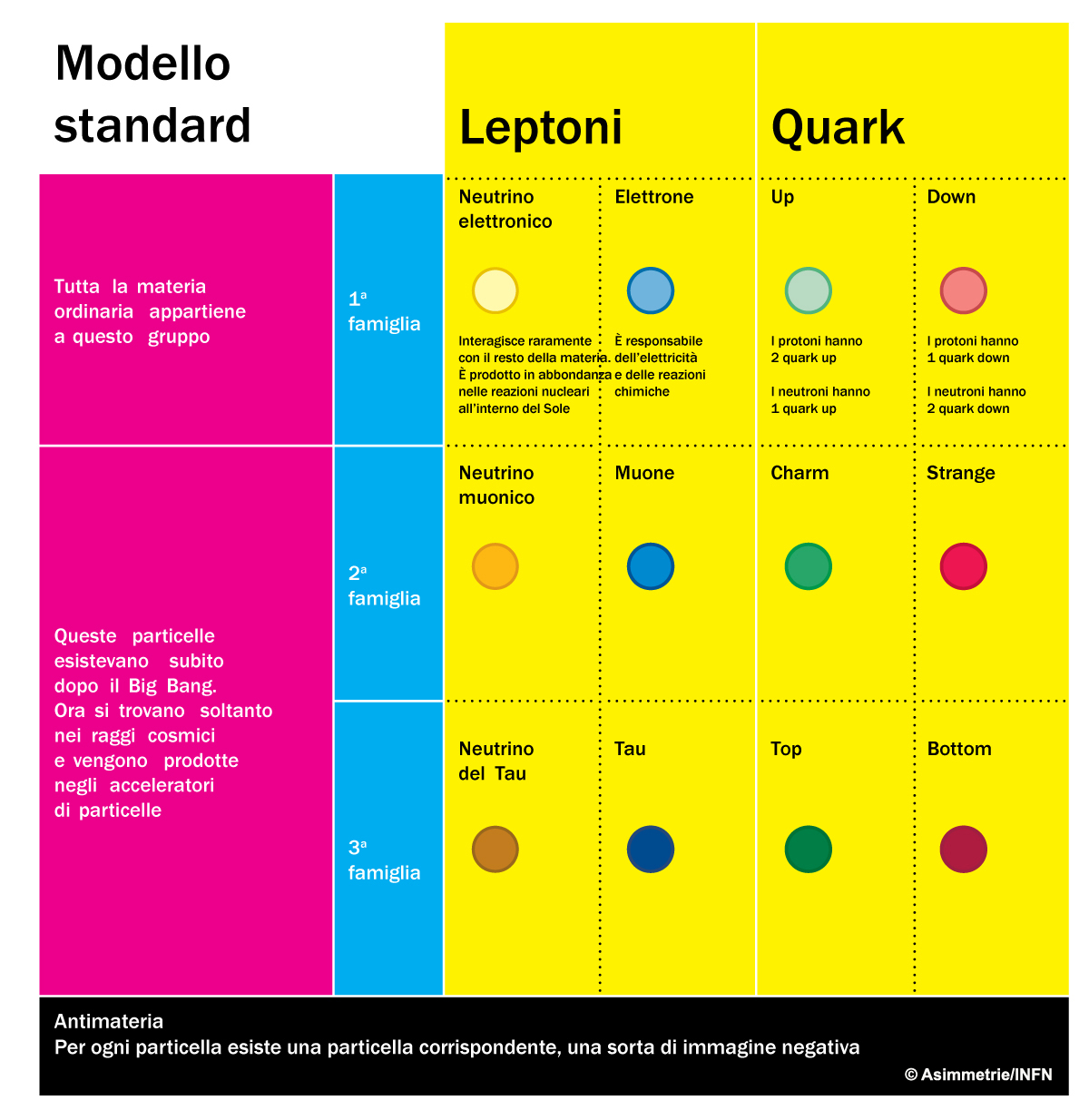 The Standard Model very successfully describes the interactions of the elementary constituents of matter in a wide energy range: from a few electron-volts (eV) corresponding to the binding energy of electrons in atoms, up to approx. 100 billion of electron-volts (100 GeV – giga electron-volts) corresponding to the masses of the W and Z mediator bosons (via Einstein’s formula E=mc2). However, the Standard Model is not able to explain certain experimental data of indisputable validity, such as the existence of Dark Matter, the non vanishing mass of the neutrinos, and why the Universe is dominated by matter rather than by antimatter. This, together with the self-consistency of the theory and considerations of “aesthetic elegance”, suggests that the formulation of a theory more fundamental than the Standard Model, a theory able to account for all the above experimental observations as well as to provide an accurate description of fundamental phenomena at energies higher than those hitherto explored, is by now a necessary breakthrough. In particular, there is a strong expectation that the CERN Large Hadron Collider, built to study the physics of the fundamental constituents at an energy of around one trillion of electron-volts (1 TeV – tera electron-volt), can reveal new phenomena indicating which way to follow in the formulation of the new theory.

One of the main problems of the Standard Model concerns the mechanism of generation of the masses of the elementary constituents. The symmetry that governs the electromagnetic and weak interactions implies that the mediators of these forces, as well as the quarks and the leptons, must have zero mass.  This is in clear contrast with experimental evidences which indicate that only the photon and the mediators of the strong nuclear interaction (the gluons) are actually massless, while the W and Z bosons, mediators of the weak interactions, have masses respectively of 80 and 90 times the mass of the proton. In the Standard Model this problem is accommodated by interpreting the masses of the elementary constituents as the result of a new interaction: the interaction with the Higgs field. The Higgs field constitutes a sort of “homogeneous medium”, disseminated throughout the space, moving through which the various particles acquire their mass. This mechanism is technically consistent, and its validity has been clearly strengthened by the discovery of the Higgs boson. But at the same time, the mechanism raises a number of theoretical problems, because unlike the four fundamental forces, the interaction of the Higgs field is not based on a principle of symmetry, and for this reason the mechanism is highly unstable at high energies. This instability leads to the conclusion that at high energies (in particular of the order of the TeV) new particles or new interactions should appear. Moreover, it is not at all clear why quarks and leptons of the second and third family have a mass (i.e. an interaction with the Higgs field) much greater than those of the first family. In the Standard Model, the hierarchy of the masses of the fundamental constituents remains an unsolved mystery.

Among the extensions of the Standard Model that have been proposed, which can explain some of (but usually not all) the problems of the Standard Model, is supersymmetry, a new symmetry that interconnects particles with different spin (or intrinsic angular moment) and that envisages the existence of a multitude of new particles with masses of the order of the TeV, and also more “exotic” models, that even predict the existence of additional space-time dimensions.

Besides the study of possible extensions of the Standard Model, the interests of the Theory Group of the LNF cover the vastness of the interests of contemporary physics: from models for interpreting the possible nature of Dark Matter and for predicting some of its properties, to theories that attempt to explain the origin of the asymmetry between the components of matter and antimatter in our Universe. From the theoretical study of the microscopic structure of solid materials to the physics of nanotechnologies, from computer simulations of quantum chromodynamics, i.e. the modern theory of strong nuclear interactions, to the development of new research projects for the future of the laboratories. A large part of the theoretical activity carried out at the LNF regards numerical simulations of complex processes, both for nuclear as well as for condensed matter physics. Although the Standard Model is a mathematical model based on a few relatively simple rules, and containing a small number of elementary constituents, obtaining precise predictions for macroscopic processes from this model constitutes a problem of an unimaginable complexity. Just think of atomic nuclei, the molecules of organic systems or the structure, dynamics and evolution of different astrophysical systems (such as the star cores, the supernovae, neutron stars and black holes). In all these cases we deal with bound states of an extremely large number of elementary constituents, whose macroscopic behaviour can be deduced from the elementary laws only by means of controlled approximations, together with the implementation of complex numerical simulations run on powerful latest-generation computers.