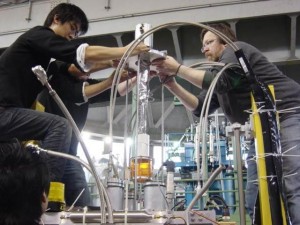 KAONNIS (KAOn Nuclear/Nuclei Interaction Studies) is an integrated initiative dedicated to the experimental studies of the low-energy kaon-nucleon and kaon-nuclei interactions.

The kaon meson contains the “strange” quark and its interaction with nucleons and nuclei involves the strong interaction described by the Quantum ChromoDynamics (QCD), which, at low energies, in a non-perturbative theory, due to the fact that interaction becomes stronger as the energy decreases. Various models were developed to study QCD at low-energy, among which: potential models, chiral perturbation theory and also lattice theory. All these models need experimental input to be checked and optimized and KAONNIS is providing such fundamental  experiment input. The impact of our experimental results extend from nuclear and particle physics to astrophysics (equation of state of neutron stars).

KAONNIS include experimental studies of kaonic atoms, a type of exotic atoms where the electron is replaced by a negatively charged kaon, and nuclear interaction studies between kaons and nuclear matter.

There are other activities within KAONNIS, such as: the AMADEUS kaon-nuclei studies (at DAFNE) and the kaon-nuclei interactions studies within various experiments at J-PARC (among which E15, E31, E57 ad E62), which are not described in detail.

The SIDDHARTA-2 Collaboration aims to perform the first experiment of the kaonic deuterium transitions to the fundamental, 1s, level, to complete the SIDDHARTA measurement of kaonic hydrogen (A New Measurement of Kaonic Hydrogen X-rays, Phys.Lett. B704 (2011) 113-117), the most precise in the world, and allow to extract the antikaon-nucleon scattering lengths, which are fundamental quantities in low-energy QCD study.

A kaonic atom is formed when a negatively charged kaon enters a target, stops inside and replaces an electron in an atom, forming a highly excited (mass of the kaon much larger than the electron one) kaonic atom. The kaonic atom de-excites towards lower energy levels and emits radiation. When reaching the lowest level, 1s, the kaon interacts with the nucleus also by the strong interaction, which induces a shift and a broadening of the width of the level with respect to the purely electromagnetic calculated values. The X-ray transitions to the fundamental level aloe to extract the shift and width and these quantities are then related to low-energy QCD.

SIDDHARTA-2 aims to perform the first difficult measurement of kaonic deuterium X-ray transitions to the 1s level, by using the kaon beam generated by the DAFNE collider and newly X-ray Silicon Drift Detectors.

SIDDHARTA-2 is a broadly international collaboration among 12 Institutes coming from 8 countries (see the list of collaborators in https://www.actaphys.uj.edu.pl/fulltext?series=Reg&vol=51&page=251) with expertise in kaonic atoms, detection systems, cryogeny and vacuum, read-out electronics, data analyses and Monte Carlo simulations.

The setup is complemented by a trigger system based on scintillators read by Photo-Multipliers giving a trigger on the back-to-back generated kaons from the phi-decays, two veto systems for the background reduction and a shielding structure done mostly in lead to reduce the background.

The SIDDHARTA-2 setup in its first configuration, SIDDHARTINO, aiming to measure kaonic helium transitions to optimize the setup in the view of the kaonic deuterium measurement, is installed on DAFNE and presently in data taking.

After SIDDHARTINO will measure kaonis helium and the setup will be optimized from Signal/Background point of view, the full SIDDHARTA-2 setup will be installed on DAFNE and a period of data taking, aiming to collect an integrated luminosity of 800 pb**-1, 2ill follow in 2020-2021.

In parallel with the kaonic deuterium measurement by SIDDHARTA-2 the collaboration plans to perform feasibility measurements with a High Purity Germanium detector places aside, for other kaonic atoms measurements for future dedicated measurements after SIDDHARTA-2.