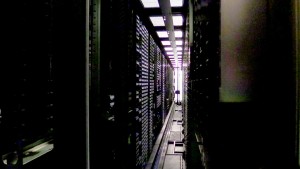 KLOE-2 is the main experiment of the Laboratori Nazionali di Frascati and the study of quantum interference with neutral K mesons  produced at the electron-positron  accelerator DAΦNE and of the intrinsic properties of matter particles with respect to anti-matter particles are among its main physics goals. KLOE-2 first data taking campaign started in November 2014 and successfully ended last July with the observation of about 1 billion neutral K mesons. The second data taking campaign started last September aiming to collect more than 5 billion neutral K mesons in the next two years.
To collect information on what happened in the detector and to study the particles produced during collisions, KLOE-2 has since 1999  its own computer centre with a cluster of extremely powerful  IBM Power7 and Power8 machines and an IBM 3494 automated tape library for data storage.

Custom software developed by members of the KLOE-2 collaboration allows to access data stored in the tape library via high-speed tape drives connected to robotic arms and provides the researchers with a transparent management of the data towards the achievement of new physics results. Real-time access to the entire data set is provided to researchers.

KLOE-2 computer center is entirely based on state of the art technologies and it is not so different from computer centres used by government agencies, like the Banca d’Italia and Ministry of Economy and Finance.

KLOE-2 experiment runs 24-7 and the data management system is organized not to stop data acquisition for any reason. Each second 1,4 Gbyte of data are sent on average over the WAN and SAN networks.

The extreme expandability of the new tape library is one of the most important aspects which steers our computer centre to get a linear growth of the mass storage. Using this configuration, present and future experiment’s requests could be easily satisfied. 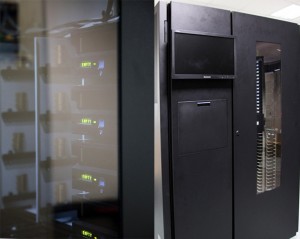 Presently at INFN there are no other units achieving such performances.

TS4500 tape library mounts and unmounts up to 15 tape cartridges per minute, twice the previous IBM3494 tape library and it has a better cartridges density rate per volume and also a better robotic arms speed. Present storage capabilities is 5.5 PByte obtained with one single module hosting up to 550 tape cartridges and 16 writing and reading tape drives. Each tape of the new library could store about 1400 movies in DVD format, or 400 movies in the new Blu-Ray format ten times more than previous tape library.