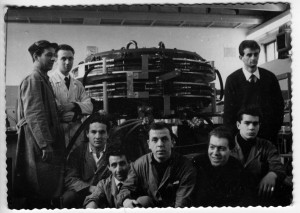 In 1961, at the National Laboratories of Frascati, a small team of young physicists and engineers, under the leadership of the theoretical physicists Bruno Touschek, designed and built AdA, the first particle-antiparticle collider. Electrons and positrons, circulating in one ring at the same speed but in opposite directions, annihilating and turning all the initial energy into new particles.

AdA had a brief scientific life, but it remains a milestone in the history of science. As a progenitor of the many electron-positron storage rings which followed, Ada showed to the particle physics community that electron-positron colliders were possible.

Later on, similar accelerators, but with higher intensity and energy, were built in France, Germany, in the United States and in the Soviet Union. In Italy, at the INFN National Laboratories of Frascati, ADONE (1967) e DAFNE (1997) were built following AdA’s path.

Video “Bruno Touschek with AdA in Orsay” ( Downloading of this video is allowed only for personal and/or educational purposes. All rights of reproduction are retained by INFN and the authors.)