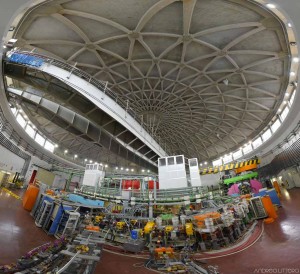 DAΦNE is the collider currently in operation in Frascati. The accelerator consists of 2 rings approx. 100 m in length, in which high-intensity electron and positron beams circulate and intersect in two possible interaction points, one of which is currently in use and holds the experiment’s detector  KLOE-2. The total energy of the beams in the reference system of the centre of the mass is equal to 1.02 GeV, corresponding to the mass of Φ mesons which are produced at the rate of 300 per second. The first particle beams started circulating in DAΦNE in 1997. Since then, an intense activity began involving – with different aims and at different times – various scientific collaborations and their experimental apparatus: KLOE, FINUDA, DEAR, SIDDHARTA.

Currently, DAΦNE is providing data to the KLOE-2 experiment, which has a major research programme for the study of the fundamental symmetries of elementary particles. While producing physical events for the KLOE-2 experiment, the synchrotron radiation emitted by the electron beam is also used in a complex laboratory dedicated to spectroscopy using synchrotron light, DAΦNE-L: DAΦNE is officially part of the European infrastructure for research with synchrotron light. In the near future, at the end of the KLOE-2 experimental programme, it is planned to install a new enhanced version of the SIDDHARTA detector on the accelerator to begin an exciting new research programme regarding the not yet fully understood properties of atomic nuclei. In this context, it should also be remembered that keeping the electron and positron beams circulating and colliding with the characteristics required by the various experiments is in itself a prominent research activity that involves continuously addressing and solving sophisticated physical problems and technology challenges. In 2007, DAΦNE was used, for the first time in the world, to implement and test a new method for improving the collision efficiency between electrons and positrons.

The new method, called “Crab Waist Collision Scheme”, made it possible to considerably improve the accelerator’s performance. This research and development activity in accelerator physics has had wide international attention: there are currently projects and machines under construction which include Crab Waist as an essential element.