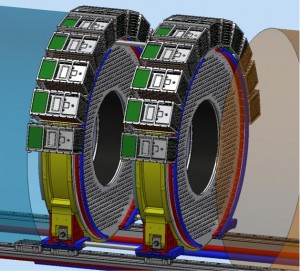 The Frascati National Laboratories are participating in the design and construction of the Mu2e experiment at the Fermilab in the United States, scheduled to start in 2020.
According to the Standard Model, muons decay into electrons through a 3-stage process: μ– → e–anti-νeνμ, in which the total lepton number between initial and final state is preserved. The Mu2e (pronounced Mu To e) experiment researches the process of direct conversion of a muon into an electron in the presence of an aluminium nucleus. This process violates the conservation of the lepton flavour, and in the Standard Model is absolutely negligible (probability = 10-52). Its direct observation is therefore an indication of new physics (Supersymmetry, Leptoquarks, Z’, etc.). The importance of this measurement lies in the complementarity with research on direct production of new particles (as in the LHC collider) and other measurements of lepton violation (μ– → e– γ, μ–→ e– e+ e–) and in the extension of the explorable mass limit, which reaches hundreds of TeV, far above the values which can be produced in current colliders.
The difficulty of the experiment lies in the extreme rarity of the process, equivalent to the probability of having your home destroyed by a meteorite or struck by lightning in the next 3 months. The objective of the experiment is to achieve sensitivities of 2.5 x 10-17, i.e. 10,000 times better than the current measurement. To do this, the three basic components of the experimental equipment are: (1) a pulsed beam of high intensity muons produced via a proton beam impinging on a tungsten target; (2) a magnetic transport system for muon transport and selection; (3) a 12 m solenoid inside which the aluminium target and detectors are positioned.
The 10 billion muons produced every second are blocked in the target. In 40% of cases, the muon is captured in 1S orbit, giving rise to a muonic atom. In the remaining 60% of cases, we have processes of nuclear capture of the muon that give rise to a background of protons, neutrons and photons. In the rare occurrence of conversion, a muon in 1S orbit is converted into a “mono-energy” electron with pulse values very close to its mass at rest: 105 MeV/c. The detector must be very precise in order to distinguish the signal from the background and consists of a “straw” tube tracer system and a crystal calorimeter. The laboratories have a leading role in the INFN contribution to the experiment, leading the design, prototyping and construction of the electromagnetic calorimeter. The calorimeter must reconstruct the conversion electrons with an energy resolution of 5% and a time resolution better than 0.5 billionths of a second. To do this, the detector consists of 2 discs of 1,400 pure scintillating cesium iodide crystals (CsI) optically coupled with a new generation of silicon photomultipliers (SIPM) with high detection sensitivity for the ultraviolet component at 310 nm of the scintillation light.