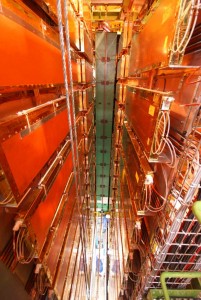 LHCb is an experiment dedicated to the study of particles containing the b quark. These particles will be produced in large quantities in proton interactions in the LHC. They will always be produced in pairs: one particle containing the b quark and the other containing the b antiquark.
The study of certain decays of these particles – which occur very rarely – may provide an explanation of the mechanism responsible for the fact that we live in a universe of matter and not antimatter. The small “defect in the CP mirror” is an important factor in the evolution of the universe, which initially consisted of equal quantities of matter and antimatter: without CP and baryon number violation, matter and antimatter would have to constantly annihilate each other in energy flashes and in the universe there would only be light with no matter.
The LHCb detector is specialised for its physics programme and is simpler than the other devices at the LHC; its key element is the vertex detector that will measure the traces of particles emerging from the interaction and the Cerenkov counters that recognise the nature of the particles