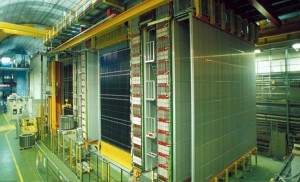 Neutrinos are fundamental particles with very small mass and no electric charge. In nature there are three types and as a consequence of quantum mechanics they can oscillate from one type to another. The OPERA experiment, situated at the Gran Sasso underground laboratories, has been designed to directly observe the oscillation of muon neutrinos from the CNGS beam produced at CERN into tau neutrinos. The OPERA detector essentially consists of nuclear emulsion sheets alternating with sheets of lead. The target tracker, consisting of scintillation detectors, locates the neutrino interactions, limiting the time required for electronic scanning of the nuclear emulsions. Magnetic spectrometers identify the muon particles produced in the interactions, measuring charge and momentum.
Data acquisition on the beam terminated in 2012; the experiment is currently being dismantled. The collaboration observed the appearance of 5 tau neutrinos and currently data analysis is under completion, with particular interest in the search for sterile neutrinos or non-standard weak interactions.