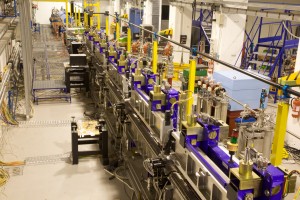 The SPARC_LAB laboratory was born as the integration of one last generation accelerator (SPARC) and one very powerful laser (FLAME).

It hosts a Free Electron Laser (FEL) which observed a radiation coherent between 500 nm (Green) and 40 nm (UV). This radiation is produced injecting SPARC’s electron beam into a series of magnets with alternate polarity. The  SPARC FEL emits ultrashort pulses (lasting 0.1-1 pico-seconds).  This class of devices allows therefore the study of extremely rapid chemical reactions, relevant to biomedic research. Furthermore, inside SPARC_LAB a source of X radiation, produced via Thomson diffusion, was built. In this source, after the frontal collision between the electron beam produced by SPARC and the laser beam produced by FLAME, part of the laser beam is reflected backwards, reduced to wave length (up to X rays).

This source will be useful for various research applications, including the medical field. Research is also focusing on new compact acceleration techniques using ionized gas (plasms) excited by the FLAME laser or SPARC’s electron beams. In a plasm can be generated accelerating electric fields over a thousand times superior to those generated by conventional accelerators: for instance, the equivalent to SPARC’s energy (which takes 12 m to achieve) could be reached with just 2 cm of plasm.