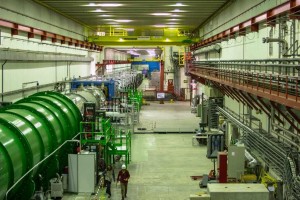 There are two ways to search for new physics: one aims to increase the available energy to produce and observe new particles (a famous example of this “discovery” physics is the search for the Higgs boson at the LHC); the other aims to measure processes that have never been observed, being extremely rare, and compare them with the theoretical predictions, NA62 has in fact the primary purpose of searching for new physics by measuring a rare decay of the K meson.
NA62 is the sixty-second experiment hosted in the North Area of the Super-Proton Synchrotron (SPS) at CERN in Geneva. The purpose of the experiment is to measure the probability of a very rare decay of the positive kaon into a pion, a neutrino and an anti-neutrino: $K^+ \to \pi^+\nu\overline{\nu}$ . This value is predicted very accurately by the Standard Model, also thanks to the measurements of other decays made in the past with great precision. The experiment is taking data from 2016 In this period, 5,000 billion kaon decays has been produced, but of these only approx. 1,000 will decay in the desired manner, while the vast majority of the other kaon decays will produce at least one photon (γ) or one muon (μ). Using this information, the NA62 researchers will attempt to distinguish and count the kaon decays of interest.