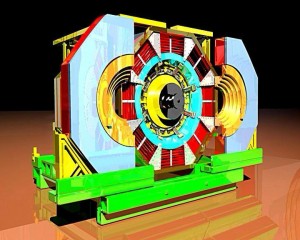 The BESIII experiment, operational since 2008, measures the characteristics of events produced in the annihilation of electrons and positrons colliding in the BEPCII (acronym of Beijing Electron Positron Collider) accelerator, at the IHEP laboratory in Beijing. The BEPCII collider runs at a total energy between 2 and 4.2 GeV, the region in which particles with c (charm) quarks are produced with high frequency.The BESIII detector covers more than 90% of the solid angle, and includes several subsystems for measuring the momenta of charged particles, photons and neutral hadrons: a cylindrical drift chamber, a calorimeter composed of Cesium Iodide crystals, a system for the identification of charged particles by means of time-of-flight measurement in plastic scintillators and glass multi-RPCs, and a muon detection device based on glass RPCs.
The physics measurements under way with BESIII are numerous: charmed meson characteristics, meson and baryon form factors, measurements on multi-hadronic production in general, searches for new hadronic states expected in the cadre of the Standard Model of particle physics but as yet unseen, and also for states beyond the current theoretical understandings.