Home » News » The 2015 Nobel Prize in Physics for neutrinos

The 2015 Nobel Prize in Physics for neutrinos 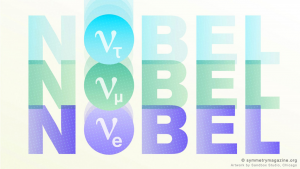 The 2015 Nobel Prize in Physics has been awarded to Takaaki Kajita from Japan and Arthur B. McDonald from Canada, for their key contributions to the SuperKamiokande experiment in Japan and Sudbury Neutrino Observatory (SNO) in Canada, which demonstrated that neutrinos oscillate.

Neutrinos are in fact chameleon-like particles, switching between three different types that physicists call “flavours”: electron, muon and tau neutrinos. Contrary to that predicted by the Standard Model, this metamorphosis requires that neutrinos have mass. The discovery has changed our understanding of the innermost workings of matter. The neutrino Nobel Prize is another extraordinary achievement in the field of particle physics after the discovery of the Higgs boson, which received the Nobel Prize in 2013, and is one of the most promising keys to unlocking the mysteries of the Universe. A particle, the neutrino, that speaks good Italian. Starting from its name, jokingly coined by Enrico Fermi to distinguish it from the neutron which also has no electric charge, but a much greater mass. Then there was Bruno Pontecorvo who first hypothesized that neutrinos might oscillate also suggesting how to observe them in an experiment with nuclear reactors. And then the INFN’s Gran Sasso National Laboratory, where the MACRO, Gallex/GNO, BOREXINO and OPERA experiments are helping to shed light on all the various aspects of such oscillations. The INFN Gran Sasso National Laboratories are currently working to solve the dilemma of the nature of this particle, as suggested by Ettore Majorana.